[In the mail today I got my copy of this month’s G Magazine (Green Living Made Easy), featuring a Yes/No opinion piece on nuclear power. The “Yes” was provided by yours truly, and it was great to see the name Decarbonise SA in print for the very first time! My 400 words are to be found below.

The “No” position was handled by David Noonan of the Australian Conservation Foundation. This is one of Australia’s most prominent environmental organisations that has been responsible for some wonderful work and advocacy over the years. But sadly it maintains an opposition to nuclear power. The opposition flies in the face of evidence of its safety and, more troublingly, evidence that climate change is slipping quickly out of our control. I have to conclude that the opposition has become ideological and cultural in such organisations and will be very difficult to address.

I haven’t been able to locate David’s piece on line to post here. Please let me know if you find it and I will be happy to run it under mine and let people decide for themselves. I guess you could say there is not much of anything new in his piece (it’s dangerous, it makes plutonium, it’s really expensive, we can do it with renewables). I have never met David; I have been assured he is a nice guy, and he has certainly been in the game a very long time. I asked him a pretty pointed question in a debate setting once where he showed a surprising willingness to cherry pick a single line from a whole book (Prescription for the Planet by Tom Blees), quote it well out of context to a roomful of people and make a terribly false inference. It was a pivotal moment for me in my journey from opponent of nuclear power to proponent. If it required that sort of behaviour to keep people afraid of nuclear power and in opposition to it, I wanted nothing more to do with it. About a year later, I find my photo staring at him from across the page, head to head in an opinion piece. It’s a funny world.]

When our strategy fails, we must change it

Ben Heard is Director of ThinkClimate Consulting, and Founder of Decarbonise SA

Prior to Fukushima, Australia had among the world’s highest per capita greenhouse gas emissions. We were casting about for a solution to our fossil fuel dependence, hoping a grab bag of efficiency measures, investments in renewables and pricing of greenhouse pollution would somehow shut down fossil fuel power stations.  This was failing. Globally the march to climate catastrophe was continuing with a forecast doubling of energy demand by mid-century. The growth in energy consumption was critical to help the world’s poor move to a better existence. But the energy was being delivered by coal that killed people in great numbers from accidents and horrible air pollution, while driving up greenhouse gas emissions.

The quake and tsunami have been and gone. Fukushima is past the crisis point but remains unresolved. Crucially though, nothing else has changed. The problems are no less urgent. The alternative solutions are no more adequate. That gives Australians a choice between two fundamental pathways.

The first is to absorb the fear that Fukushima generated and maintain the status quo, being outright rejection of nuclear power.  Make no mistake; whether intended or not, that means maintaining a greenhouse gas intensive energy sector. The fossil fuel giants will breathe a sigh of relief. They know the only credible risk to their dominance is nuclear power. 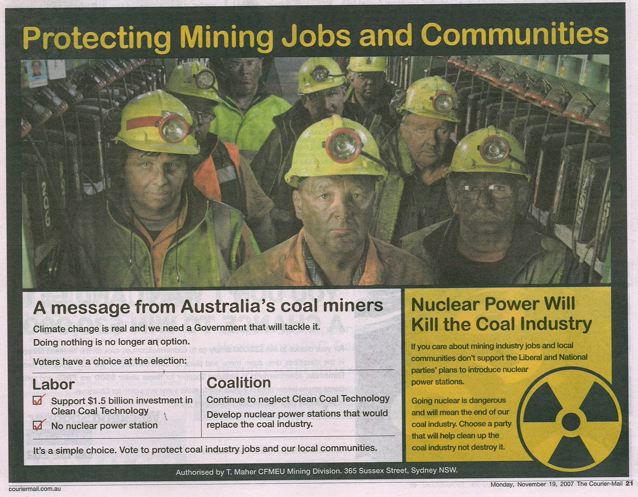 While Australia has abundant renewable energy resources, abundance is only part of the puzzle. Even if abundant, when energy sources are diffuse, intermittent and location specific, like wind and solar, it is very difficult to catch, store, and move energy to where and when you need it. They work, but not to the scale we need.

The second pathway means discussing the missing ingredient for decarbonising our economy; nuclear power. This super-concentrated energy source generates no greenhouse gas or other air pollution. It provides fully 15% of global electricity generation, in 29 countries, including the 16 largest economies (excluding Australia at number 13). Its fearful reputation bears practically no resemblance to its un-matched safety record. Australia has a clean slate for nuclear power, allowing us to move straight to Generation III+ reactors that benefit from 40 years of design improvements compared to Fukushima. We can lead the introduction of Generation IV technology that consumes nuclear waste as fuel, spelling the end of fossil fuels forever.  A strategy built around modern nuclear power, renewable energy and energy efficiency, each deployed as their advantages and disadvantages dictate, can deliver what has eluded us so far; a prosperous Australia with dramatically reduced greenhouse gas emissions.