A summary of my appearance at the Paydirt Uranium conference where I did my best to give the industry a kick up the backside. 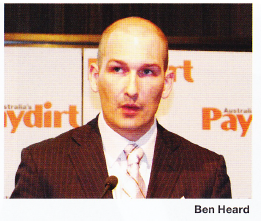 Once a fervent anti-nuclear campaigner [my note, this is a journalistic overstatement. I did not lead or participate in anti-nuclear campaigns. I was a member and supporter or organisation that did. That was one of the reasons I supported them], ThinkClimate Consulting Founding Director Ben Heard has turned 180 degrees and has become a valuable advocate for nuclear power generation; but don’t expect him to side blindly with the uranium mining industry.

Heard’s journey from opponent to proponent of nuclear power is inseperable from his mission to stop climate change and its effects.

The urgency to address the climate change crisis made Heard revisit his opposition towards nuclear power, expose commonly held “truths” as myths and and push for nuclear power to replace coal as the baseload power option.

“Any honest strategy to tackle climate change will be one of ‘energy efficiency, plus renewables plus… something else’ otherwise we cannot meet the challenge in the necessary timeframe,” Heard told delegates, “The gap in the the equation forced me to go and re-think a lot of things. Now that gap needs to be uranium in order to avert a climate disaster.

“It is essential than an open and honest examination of nuclear power as a means to tackle climate change must be permitted to take place in Australia.”

Little disagreement came from the delegates at Paydirt’s 2012 Uranium Conference. But Heard wanted more than lip service from the audience; he wanted a call-to-arms from the industry.

A worthwhile request, it seems, considering that Heard himself is battling the odds in trying to convert the anti-nuclear Green and Left activists, NGOs and other parties. At times he is as well-received as Judas amongst the Disciples.

“We have people openly harrass us,” Heard said. “However we are making significant progress with agreement in certain degrees.

“People migrate and I think being extremely patient with people who are doing that is very important, bludgeoning people who are in that process to hurry up is deeply unhelpful. Because changing one’s mind on nuclear power, like I did, is as much about changing your mind as changing your identity.

“You see it in the opinion-maker level of things as well. The number and calibre of traditional environmentalists, people with longstanding opposition who have moved, is growing very fast. I think it is approaching a tipping point within the movement.

“I have been suprised by how lineball the objection to nuclear is for the greater number of people; that it is not as deeply or sincerely held as our body politic assumes. Most people hear the factual and rational presentations and come across quite readily.”

But uranium miners cannot expect blanket support from Heard, who doesn’t agree with the way extractive industries contribute to climate change and that some in the industry harbour climate change sceptics. He called for less ambivalence and apolitical indifference towards nuclear energy attitudes in Australia.

“It was nice to be described as an asset to your industry. That being the case, I hope you won’t all mind a little tough love in what I have to say and a few home truths to tell you.

“You should be out in front on this issue, making life easier for your industry. I would really like to see the uranium industry behaving a lot more like the gas industry, and dress itself up in some nice green clothes.

“I wouldn’t be afraid of believing that what you do is good, not bad, and having the courage to stand up to the discourse that has been so dominant in Australia,” Heard said.