Guest post by John Morgan. John has a PhD in physical chemistry, and research experience in chemical engineering in the US and at CSIRO.

I’ve just returned from the IQ2 debate hosted by the St James Ethics Centre in Sydney, contesting the proposition “We’ve seen the energy future, and it’s nuclear”, where the civilities were opened by Ben Heard speaking for the proposal.  It was a great night, and I wanted to recount some of the discussion and audience reaction here, and some of my own thoughts.  The debate was recorded and will later be available in both audio and video in the ABCs Big Ideas series.

The St James Ethics Centre is currently running an online poll on this topic and you may wish to register your own position here.

As I entered the venue I was polled for my position on the topic.  Before the speakers were heard, the audience broke out in an almost perfect 35% / 31% /34% split between those for, against and undecided.  The audience was reported by organisers as about 1,000.

The audience skewed older.  I would guess the median might have been in the 50-60 range, but with all ages present.

Simon Longstaff, the Director of the St James Ethics Centre, MC’d the event. 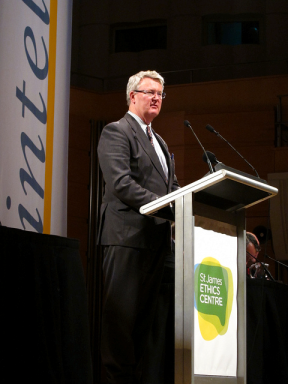 Ben Heard. This bloke should get out more.  Seriously, he’s that good.  As an interstate interloper to this website you South Australians are lucky to have him.  Ben opened the debate with a very clear, crisp and powerful entreaty to deploy nuclear power as the necessary missing link in our zero emissions toolkit.  He spoke about his journey from anti- to pro- nuclear, the Integral Fast Reactor, the safety of nuclear power, and the seriousness of the climate change disaster we are looking at, making the point that this is really a choice about survival.  His message was clear and simple and cut through.

Fumihiko Yoshida.  The first speaker against was a journalist on the editorial board of Asahi Shimbun, the major Japanese daily newspaper.  He told a heartwrenching tale of a lady from Fukushima who suicided from the emotional distress of the nuclear event.  My own response was that he was not describing a nuclear tragedy, but instead the tragedy of fear and stigma that is  the result of misguided radiophobia.

Michael Angwin, CEO of the Australian Uranium Association, followed Yoshida by setting the Fukushima tragedy in the context of the desire for economic development and growth that nuclear power satisfies.  This did not resonate with me and I wondered how the audience would react.  I think the more effective counter to Yoshida would have been to point out he had not described tragic consequences caused by the nuclear disaster but rather by the ill-founded fears fanned by hysterical responses to the disaster.

Dominique La Fontaine is VP of Communications with Repower Australia and formerly CEO of the Australian Wind Energy Association.  She told us nice stories of a future of renewable energy and distributed power generation.  She does not have an engineering background but has met many engineers who have told her that renewable energy can completely power Australia.  I did not find her convincing but imagine others might.

What grabbed me throughout her argument was her constant reference to “renewables and gas”.  “Renewables with gas.”  “Renewables plus gas.”  I was honestly surprised that she exposed her argument to the criticism that a renewable future is a gas future.  Ben picked up on this, counting I think six such conflations, and he hammered her on it later in the proceedings.

The key insight is this:  If La Fontaine, in a series of high profile communication roles in renewable energy lobby organizations, is apparently not sensitive to the gas Achilles heel of the renewables response to climate change, then the public at large also does not understand this.  Therefore an important part of our communication should be to emphasize the reliance of renewable energy on available fossil gas.

Daniela Stehlik is a sociologist, and directed the 2009 project Understanding the Formation of Attitudes to Nuclear Power in Australia.  She focussed on the need for Australians to understand our energy systems options as integrated systems, and to be aware of the tradeoffs we make when choosing between options.  She discussed the loss of quality farmland to gas fracking as a consequence of the avoidance of nuclear power, and called for an education programme so Australians are better informed about our energy choices and consequences.

Ian Lowe, President of the Australian Conservation Foundation, made the closing argument.  Ian is a great speaker – animated, witty and he connected well with the crowd.  But as Michael Angwin picked up, he did not really prosecute an argument to support his case. He waved a yellowed copy of the 1976 Ranger Uranium Enquiry about, saying we should not pursue nuclear until we can address its chief concerns of waste disposal and weapons proliferation.  He was, strangely for an educator, very cynical about Stehlik’s desire for better education, and perhaps for good reason.  I shall have some more to say on these remarks below.

Audience members were invited to engage either panel with their observations and challenges.  There were an equal number of questions from the floor for both sides of the debate.

Goronwy Price (Vice President of Environmentalists for Nuclear Energy Australia) asked Ian Lowe, if he were the President of Japan, would he turn their reactors back on, given the looming energy gap.  Ian responded by quoting a politician: “That is a serious question that demands sophisticated evasion”, and then went on, without apparent irony, to evade the question in a sophisticated fashion by deploying H. L. Mencken’s aphorism, “For every complex question there is an answer that is clear, simple, and wrong.”

Lowe suggested nuclear power was the simple, wrong answer to this complex question.  Ben jumped right on this saying that it actually was as simple as it seemed – that Japanese emissions would rise dramatically unless the reactors were restarted.

Two electrical engineers rose to challenge the viability of renewable energy.  The first was a young fellow who had done a Masters thesis on distributed renewable energy generation.  His research led him to the conclusion that it wasn’t feasible.  The second talked about the massive transmission infrastructure that would need to be developed and its ecological impact.

I directed a last question to those against: “Given that the rate at which we decarbonise determines the amount of warming we will ultimately experience, and given that we can decarbonise faster with renewable energy and nuclear power than with renewable energy alone, how many degrees of planetary warming do you believe it is worth to avoid the use of nuclear power?”

I had hoped for (though had no expectation of) an answer with units of degrees Celsius, to focus on the ethical dimension of this tradeoff, and Simon Longstaff obviously picked up on this as he relayed the question to Lowe.  Lowe unfortunately dodged this element by rephrasing the question as “Do we need both renewables and nuclear”.  His conclusion, obviously, was that we don’t, though for reasons I no longer recall.

The audience was again polled on their position at the end of the debate.  This time the figures came in as 51% for, 32% against, and 17% undecided.

This is an outstanding result!  To achieve such a large shift on a contentious topic seems to me remarkable.  It demonstrates that this issue can be won, and that even the briefest exposure to some simple, clear discussion can change people’s minds.  Well done Ben, Michael and Daniela!

The simplest and probably the correct reading of the dynamics is that, to a first approximation, those who oppose nuclear power by and large did not change their minds, but that half of those who were undecided before the debate became supporters.  There was no movement of the undecideds towards the anti- camp – the speakers against the proposal won no converts on the evening.

This shows the real reason for Ian Lowe’s strange rejection of education – the more people know about climate change, energy, and the whole related social milieu, the more disposed toward nuclear power they become.

Above all else, this result shows just how effective even a short exposure to simple argument can be in this debate.  There is a lot of low hanging fruit, and huge payoffs to be had from even a little information.

Perhaps the outstanding reaction of the night was this tweet:

I want to return to Ian Lowe’s odd response to Stehlik’s call for better education.  Ian did not want to see an education programme on energy issues.  He remarked that education is an irregular verb, conjugating it thus: “I educate, you propagandize, he brainwashes”.

This is a remarkably cynical view of education from an emeritus Professor of Science, Technology and Society and former Director of the Australian Commission for the Future.  What alternative would he prefer – less education, less informed decisions?  We seem to have an educator and a futurist who has abandoned both education and the future.

Ian elaborated on his point. I paraphrase: “Scientists and technologists seem to think better education will lead to more support for technologies.  In fact it often leads to less support.  The more people learn about genetic modification or nuclear power the less they want it.”

In some respects he is right.  I have seen many individuals with technical backgrounds reject many manifestations of technology.  I also do not think we necessarily need more education in, say, physics (though it wouldn’t hurt!).  Everyone is different and what floats my boat may sink someone elses.

But we do need more education.  What we need education in is ethics.  It is significant that this debate took place in the St James Centre for Ethics, because this energy argument is an argument of ethics.

The fundamental ethical question is, What should we do? We have choices to make around energy and climate, and we need a way to choose what to do.  To make the right choice we need a base of well established knowledge.  Epistemology is the branch of ethics that asks us how do we know what we know? , and then gives us the tools to answer.  Critical thinking is an applied technology of epistemology.  Utilitarianism invites us to make our choices according to the actual outcomes that they will have in the world.  It leads us to weigh our choices objectively, as when I asked Lowe how much extra warming he was prepared to accept to avoid nuclear power.

An ethical choice requires the virtue of integrity, in particular integrity towards the knowledge gained from a sound epistemological basis, even if it is confronting. This kind of integrity is the chief virtue of the scientist.  It is the value that the mechanism of peer review was established to protect.  We do not need to educate people so much in the scientific disciplines as in this kind of scientific integrity.

And finally, an ethical choice requires courage, perhaps to change our minds, or to act in spite of others expectations, and to choose to be responsible for choices that we make and accountable for their outcomes.

So along with the speakers I would also like to congratulate the St James Centre for Ethics for taking on this debate and placing it in its proper context – a debate on ethics, not technologies.