I have worked hard, over time, to ensure this is a non-partisan blog. By that I mean, the messages I have are for all players, and I don’t actually care who is running the country.

However it is not, and never will be, a politically disinterested blog. I care, very much, how the country is being run, no matter by whom.

I have made strident criticisms of Labor, Liberal and Green parties as and where they deserve it. I have expressed my intention to seek climate advantage from the current Government. Today however, criticism again flows to the Liberals.

Today, it has been reported that Treasurer Joe Hockey gave a scathing dismissal of a question relating to Australia as among the highest GHG emitters in the OECD. This from The Guardian

“The comment you just made is absolutely ridiculous,” the treasurer said in an interview with the BBC when it was suggested to him that Australia was among “the dirtiest, most greenhouse gas-emitting countries in the OECD group of developed countries”.

“We’ve got a small population and very large land mass and we are an exporter of energy, so that measurement is a falsehood in a sense because it does not properly reflect exactly what our economy is,” Hockey said.

The Treasurer is wrong and there is no need for nuance in saying so.

Australia’s ranking in the OECD excludes the emissions from our energy exports, in the same way that they exclude the embodied emissions in our imports from China.

If we counted that thermal coal export in our emissions… as you can see below, we export five times the energy in black coal than we consume domestically 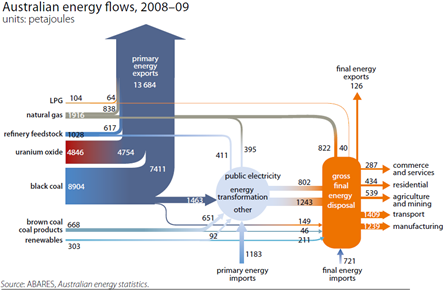 As Australia’s Treasurer, this type of mistake can only come from inexcusable disinterest in the topic.

It may be true that those who care not at all about climate change can still build nuclear power plants and slash greenhouse gas emissions.

But it makes it a damn sight less likely.