In our 2015 paper Beyond Wind: Furthering development of clean energy in South Australia, we identified a relationship between subsidy availability, subsidy withdrawal and rates of PV installation in South Australia.  The story was clear: here in sunny South Australia, subsidisation of PV caused a strong consumer response. When subsidies were combining (i.e. renewable energy certificates and feed-in tariffs were both available) at the same time as power prices were rising and system prices were plunging, PV became a true financial no-brainer. As subsidisation budgets became subscribed beyond expectations (and budgets), a process of reduction and withdrawal began. This lead to a series of installation peaks and finally what appeared to be a “new-normal” installation rate at a level far below historical peaks. 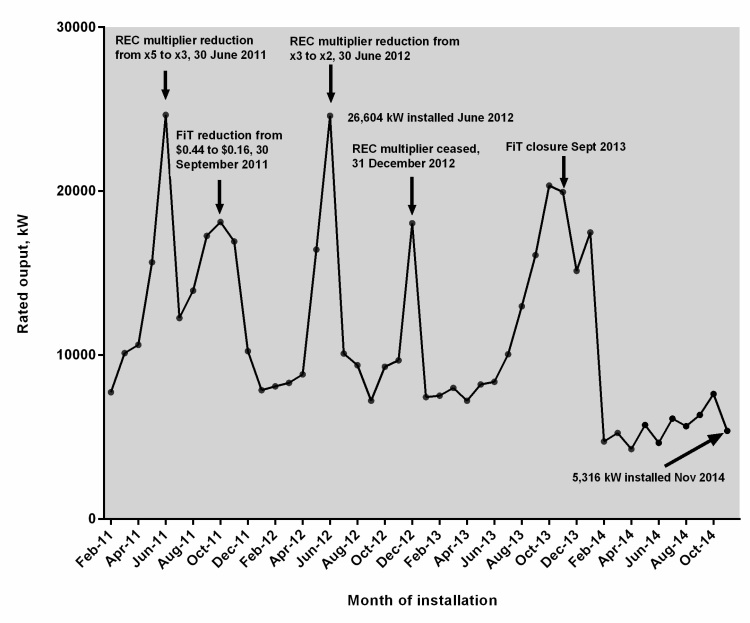 We now have over a year more data on this issue, so it pays to see what has happened since.

The “new normal” remained remarkably solid for about a year and then appears to have taken a dip to levels not seen since 2010. South Australia has continued to add PV at a much lower rate. At the time of our manuscript completion PV was providing about 5 % of South Australia’s electricity. Now it is providing more … but not much more. At over a million systems installed and penetration of nearly 25 %, any pragmatist can see that the first great age of PV has ended in South Australia. Doubtless, more can be achieved but the low-barrier, low-cost period seems to have ended.

Which was, of course the core theme of our paper: deciding whether or not to use solar or wind is a moot point. The question is: what do we do next?