I have attended my share of conferences and similar events and while they all differ, one thing is constant: the need for, and importance of sponsors. Big events cost big dollars, and even with sometimes hefty attendance fees, the role of sponsors remains a big one. Conference organisers are constantly seeking and soliciting event sponsorship from companies with whom they can identify potential alignment. In return for their support (and depending on the size of it), sponsors get massive visibility at the events. They have prominent visual branding. They will often have senior staff deliver addresses, introductions, sit on or moderate panels and the like, as well as a level of access to other conference attendees. The principle is that everyone wins, which is the way it needs to be or nobody would sponsor.

When the Canadian reactor company Terrestrial Energy (for whom I provide an advisory role) told me they were thinking of sponsoring the Sustainable Investment Forum, an event organised by Climate Action on behalf of the United Nations Environment Program, I was delighted and very supportive. I have, loudly and clearly, told the nuclear industry they must be less insular and get their message out into the clean energy mainstream. This move by Terrestrial Energy was just what I was talking about. Naturally, the event organisers would be pleased to secure another sponsor. 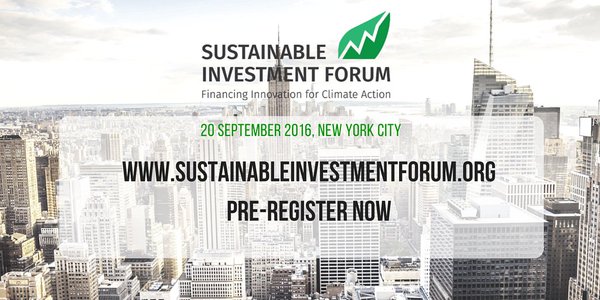 Or so I thought.

Terrestrial Energy had just commenced the process when I was forwarded brief correspondence from the organisers that included the following statement:

I looked at your website just now and unfortunately, we cannot accept any nuclear companies as clients.

Why is it surprising to receive confirmation in black and white of something which, deep down, you already know to be true? Climate Action, the organisers of the Sustainable Investment Forum literally could not, according to instructions from UNEP, accept sponsorship from this company because their business was nuclear technology. Which meant, of course, no brand visibility. No speakers. No moderators. No panellists. No access.

This is all despite the fact that the use of nuclear technology avoids around 2.5 billion tons of greenhouse gas emissions every year, is probably the lowest lifecycle greenhouse gas emitter, uses a minimal footprint of land in non-sensitive areas, is long-lived (read highly efficient) infrastructure which takes responsibility for its waste and makes no direct emissions to air other than steam.

But if you split atoms to get this outcome, sorry… we can’t be friends.

Feeling positively incensed at this I hit the interweb and promptly discovered that the statement “we cannot accept any nuclear companies as clients.” was both hypocritical and untrue. That can be a tough combination to pull-off, but in this case they achieved it with a key word: Vattenfall.

Vattenfall were Gold sponsors of the Sustainable Innovation Forum 2015 at COP21, another UNEP event organised by Climate Action. What is Vattenfall? One of the largest fossil fuel companies in Europe. With a quick scan of their site, one could be forgiven for believing their business is renewables, but the numbers tells a very different story.  This is the Vattenfall energy portfolio, in installed capacity aggregated by energy source.

Vattenfall is, firstly, a fossil fuel company, with fossils making up over half the electricity capacity and 90% of the heat capacity. Of the coal assets, all but one are in Germany where the source is lignite, the dirtiest, most polluting form of coal. The hydro facilities are concentrated in Sweden and Finland and punch above their capacity, with around 20% of the electricity generated in the portfolio. The wind, at 9% of installed capacity, does the opposite, delivering 6 TWh per year, being a capacity factor of about 30%. It’s a safe approximation that wind makes up <5% of the electricity generated across the portfolio. They have nothing in solar.

None of the fossil fuel exposure mattered. They were embraced as a sponsor at none other than COP21.

But of course a major part of their portfolio is nuclear generation. Just two facilities in Germany provide over one quarter of the installed electricity capacity and generate no greenhouse gas emissions.

So…what the hell is going on here? Three things it seems.

Firstly, what seems clear is that the United Nations Environment Program absolutely does not care what a company’s commitment to fossil fuels is, even if the majority of the portfolio is fossil fuels and the largest source is lignite, so long as there is some renewable portfolio to talk about, however small. If you have that, you can sponsor and come and talk about your renewables. I regard this as an avenue for greenwash.

Secondly, what is also clear is that provided you have renewables, any nuclear will be… overlooked. Ignored. Not talked about. It won’t stop them accepting your money, but it won’t feature at the event even when it is the largest, most reliable, most land-efficient zero-carbon source of generation in your portfolio. I am reminded of an EDF representative being told, in mid session, that he must not talk about nuclear at the recent Clean Energy Ministerial in San Francisco.

Thirdly, if you are only a nuclear company…if the only technology you are interested in is a zero-carbon technology that fissions atoms… even an advanced design that can accept existing waste as fuel, is six times more efficient in operation per unit of uranium input, has inherent safety with impossibility of major accident, is scaleable to the whole world and provides high enough temperatures to also meet the needs for industrial heat which is currently almost exclusively met with fossil fuels…for you, the door is closed.

Now fortunately, this story has a happy ending. With simple and courteous persistence from Terrestrial Energy, the folks at ClimateAction did the right thing and took the question up the chain to UNEP. The response was affirmative: Terrestrial Energy may sponsor.

This is a watershed moment. UNEP, Climate Action and Terrestrial Energy are all to be congratulated. This move must be quickly reinforced by other clean energy companies whose core technology is based on fission lest the door quietly closes again. Any semblance of a victim mentality among nuclear technologists has to end. There are forces fighting to keep nuclear technology out of the clean energy discussion. If no one else bothers to show up to the fight, their victory is assured

It’s time to start showing up. See you in New York.