Thanks to an international collaboration with the Calgary-based and very talented Andy Jaremko, my recent presentation and slideshow from the ATSE Nuclear Power For Australia? conference has been turned into this professional and highly shareable video. I hope everyone enjoys both the content and the outstanding work Andy has done making this video. It’s a wonderful example of what we can do when we pool our talents. A big shout out to everyone who has been helping out in that way, recently and previously. These are the actions that are making pro-nuclear environmentalism a movement to be reckoned with.

On that note, ticket sales for Pandora’s Promise continue. Click the buttons to the right for sales in your capital city. Adelaide and Melbourne, I’ll see you there.

Here is the paper and presentation I delivered to the ATSE nuclear conference in Sydney last week.

The feedback I received on the presentation was overwhelmingly positive, and the model I outlined was referred to repeatedly throughout the rest of the conference.

Paper: How can community support for the nuclear option be achieved

Update 30 July: As it happens, on this occasion I wrote my presentation in full, so you can read along to the slides if you wish. I kept pretty closely to this script.

It was my pleasure today to give a presentation and sit on a panel for the Leaders Institute of South Australia (Governor’s Leadership Foundation). I was joining this year’s GLF participants to contribute to the discussions on the topic of Leadership and Climate Change. While acknowledged for my varied sustainability and climate change consulting work with ThinkClimate Consulting, I was certainly there today on the back of my stand for nuclear power in Australia. What a great thing, to be able to speak to a group of 40 people who have chosen to challenge themselves with a year-long course in leadership. 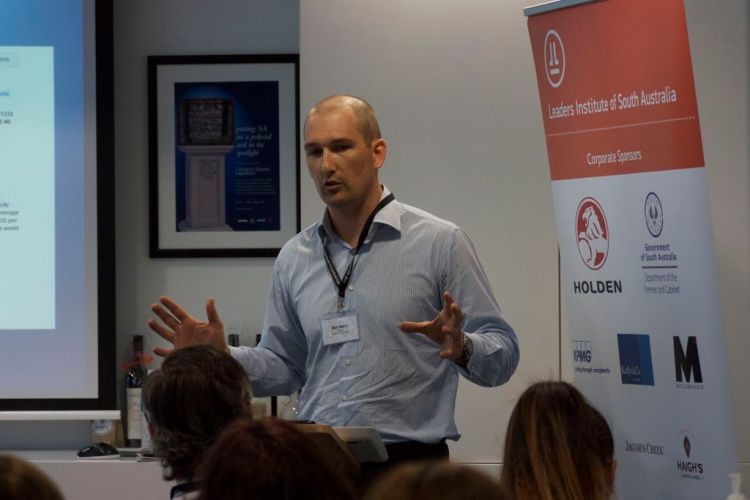 All the presentations were fantastic. My thanks to my co-panellists Faith Cook, Catherine Way, and a special shout out to Mayor Lorraine Rosenberg. My favourite politician and the whole room loved her!

Faithful to the request to speak to the issue of leadership and not just give content on my topic, I discussed how I believe leadership in climate change comes as the product of five characteristics: Honesty, Novelty, Optimism, Pragmatism and Authenticity.

You can check out the presentation here GLF2013 Final.

The presentation was very well received, the questions during the 1 hour panel were great, and all the copies of Zero Carbon Options were snapped up quickly afterward.

Thanks again to the Institute for having me.

The Academy of Technological Sciences and Engineering (ATSE), an independent body of professional engineers and technologists, believes the hesitant debate on nuclear energy in Australia needs to be responsibly refocused and reliably and factually informed.

I am delighted to announce that the Academy of Technological Sciences and Engineering (ATSE) will be hosting a two-day conference in Sydney this year with one theme and one theme only: Nuclear Energy for Australia? I have read the draft program, and it is an incredible line-up of speakers covering a huge range of nuclear issues. A veritable who’s-who of scientists, academics, economists and business people will be leaving few stones unturned. I am honoured to be counted among the speakers on the program.

If you are getting the distinct feeling that the quality of discussion about nuclear power and decarbonisation energy supplies in Australia is set to step up in 2013, you are not alone.

END_OF_DOCUMENT_TOKEN_TO_BE_REPLACED

I had a really good session this week with the Engineers Australia SA Branch, with much thanks to Tom Bammann for the invitation and set-up. Another Australian branch is exploring having me over to present, I hope they do so.

Questions were challenging and insightful, and I feel everyone got a lot out of the evening. It was a really pleasure to have Tony Hooker in the audience to offer high highly qualified insights as an Australian nuclear professional. It was equally a pleasure to join a couple of audience members afterwards for some really tough and deep discussions about what might be done to further the acceptance of nuclear in Australia as a key means to tackle climate change. I’m looking forward to these valuable new contacts attending our local DSA meetings.

A few pictures from the evening for you, thanks again to Tom.

END_OF_DOCUMENT_TOKEN_TO_BE_REPLACED

Guest post by John Morgan. John has a PhD in physical chemistry, and research experience in chemical engineering in the US and at CSIRO.

I’ve just returned from the IQ2 debate hosted by the St James Ethics Centre in Sydney, contesting the proposition “We’ve seen the energy future, and it’s nuclear”, where the civilities were opened by Ben Heard speaking for the proposal.  It was a great night, and I wanted to recount some of the discussion and audience reaction here, and some of my own thoughts.  The debate was recorded and will later be available in both audio and video in the ABCs Big Ideas series.

The St James Ethics Centre is currently running an online poll on this topic and you may wish to register your own position here.

END_OF_DOCUMENT_TOKEN_TO_BE_REPLACED

When I started this site, I had an early goal of speaking to 1,000 people about nuclear power.

Next Tuesday evening in Sydney, I will be speaking to about that number at the Intelligence Squared Debate, speaking in favour of the proposition “We’ve seen the energy future and its nuclear”.

I strongly encourage Sydney-siders to get along to this event, it should be extremely stimulating, and I am really looking forward to taking some questions from the audience.

The very next day I’m on a plane to San Francisco to participate in the Breakthrough Dialogue 2012, which has the brilliant theme “Overcoming Wicked Problems”.

END_OF_DOCUMENT_TOKEN_TO_BE_REPLACED

Today’s presentation at the SAREIC conference was extremely well received. I had tailored the message carefully and included a lot of new material, including something I workshopped with supporters over on the Facebook page. I had many firm congratulations, and like magic an article hit The Advertiser’s web page Adelaide Now.

While a little bit of technical accuracy was confounded in the transition to print, the article is pretty good (I have requested one very important correction), and in particular it was great to see them draw in detail on the decarbonisation action plan I have laid out for South Australia. 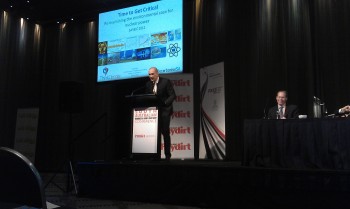 I have attached a pptx copy of the presentation here.

END_OF_DOCUMENT_TOKEN_TO_BE_REPLACED

It was my pleasure to be the guest speaker for the Somerton Park Probus Club this morning, to an attentive audience of around 40 people. Learning from the Mid Murray LAP presentation, today I delivered a shorter presentation with more time for questions, and also a little more focus on the climate crisis. I think this format worked really well.

END_OF_DOCUMENT_TOKEN_TO_BE_REPLACED

It was a pleasure to provide an address to the AGM of the Mid Murray Local Action Planning Committee in Mannum last night. It was a lovely drive up in the late afternoon sun past some very healthy looking wheat crops, though I learned that sadly the Riverland further north-east was turned upside down by a pretty big storm last night.

There were about 20 attendees, mostly local though one guest had driven quite a way to listen which is certainly gratifying.

I delivered an updated version of my original presentation from March, which was also delivered to the Local Government Association State Conference. On reflection that will probably be the last time I give that one, and instead retire it as a useful powerpoint reference for others who would like it. It’s pretty long, and I think I have moved on a bit too much. My audiences are probably better served with the shorter versions, and more extensive question time. That’s all good, I learn something everytime.

I probably won’t pick up many subscribers as many in the audience were not emailers. That being the case I will send a package of hard copy materials for them to keep on hand, distribute, refer to in future.

The presentation appeared to be well received, and I certainly received a number of compliments on it. I was pleased to have this interaction after the presentation: